Born and live in Kediri, East Java, Indonesia, Ilham has been interested in art & architectural since his early childhood. He likes to draw, paint, make collage, or whatever things that fit in his imagination. There is no boundaries on his art since he makes whatever he likes. He is not someone that graduated from an art school, but he was inspired by his surrounding friends and environment.
Lingkup jasa yang ditawarkan 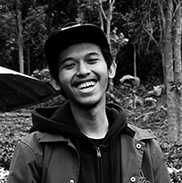